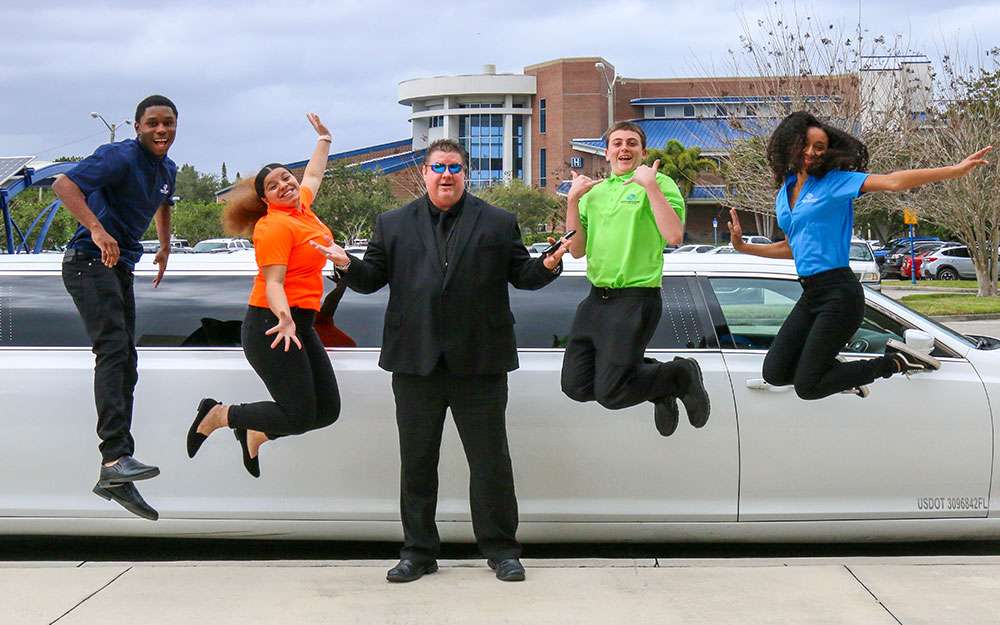 On January 23rd, 2019, local community business leaders and professionals offered their time and talent to the Boys and Girls Clubs of St. Lucie County Youth of the Year Candidates as part of Leadership Day. Sponsored by GL Homes, this is a day that honors and celebrates the Clubs most inspiring teens and their journeys. Every introduction and tour throughout the day is strategically planned around each teen’s aspirations for the future.

Making their first stop at St. Lucie Medical Center, the teens arrived in style. Eagle Luxury Transportation provided a white stretch limousine for the candidates to ride in. This was a big surprise and a great way to elevate the day. Upon entering the hospital, the teens were treated to a lovely breakfast in the boardroom and greeted by SLMC CEO, Jay Finnegan and head of nursing Nancy Hiltion for a meet and greet with photo opportunities. Afterwards, the teens had a question and answer session with Port St. Lucie Mayor, Greg Oravec, City of Fort Pierce Mayor, Linda Hudson, County Commissioner Linda Bartz, and Vice President of GL Homes, Glenn Ryals. This was a candid and open conversation by which the panelists offered advice and answered questions about mentorship, the importance of education, and personal testimonies. “In life we all make mistakes. Never make the same mistakes or you will be wasting your time. Life is too short,” stated Mayor Oravec.

After breakfast, the candidates were led on a tour of the hospital by Ms. Hilton. Both candidates, Yan Morrison a freshman at Lincoln Park Academy and Kayla Williams a sophomore at Port St. Lucie High School have plans of entering the medical field. They were able to tour the operating room, the orthopedic wing, the emergency room and the birthing center. This was an educational and eye-opening experience that made a huge impression that will not be forgotten.

Stop two, The St. Lucie County Courthouse. This excursion was planned for Yaluris Torres, a senior at Fort Pierce Westwood. Yaluris (YaYa) wishes to attend Florida State University where she will double major in business and law. All of the candidates were mesmerized as they were able to see in person two cases go before Judge Ed Alonzo. Not to steal any thunder from the judicial system, but it would be remiss to say that a highlight of the visit to the courthouse was K9 Kona and his handler Sean Masters. Judge Alonzo also graciously allowed each teen to have a photo op with his robe on while striking his gavel.

Dr. Ed Massey and his assistant Andy Treadwell treated the candidates to lunch with engaging conversation. Dr. Massey shared personal stories of his journey and stressed that even as adults, “we all have to do our homework to be the best,” and “listen more, talk less.” Candidate Christian (CJ) Galentine hopes to attend Indian River State College and pursue a degree in human services. The visit ended with a tour through the Knight Center for Emerging Technologies, which included a trip to the green room, wherein the candidates had the opportunity to be filmed during an individual three question interview with Mr. Treadwell. This was a great exercise in preparation for their competition interviews.

The final two stops of the day included The Harbor Branch Ocean Discovery Center (ODVC) and Natalie’s Orchid Island Juice Company. The candidates and chaperones were captivated during the hour-long personal tour of ODVC. Who knew that the fins of a dolphin were as unique as our own finger prints, and that using self-contained tanks, plants can be grown hydroponically? Natalie’s was equally as informative as owner Mary Grace Sexton allowed the candidates on a tour of the facility that is not open to the public. They were also allowed to fill up complimentary thermal bags with everybody’s favorite orange juice, and a few other flavors such as; beet juice, carrot – orange – turmeric, and green tea. Ms. Sexton shared her personal story of success through hard work and determination.

If you are interested in meeting the 2019 Youth of the Year candidates, we encourage you to attend the judging competition on Wednesday, January 30th at Treasure Coast Lexus. Each candidate will perform their speeches beginning at 4:30 pm. This event is free and open to the public. Refreshments will be served.

You may also attend the Youth of the Year Celebration on Wednesday, February 6th. This event is also free to the public and will be held at PGA Verano. RSVP appreciated. mjohnson@bgcsl.org. Follow the event on Facebook. #YOY2019

A group of over 30 hardworking volunteers from Kohl’s donated several hours of their time Oct. 19 to help prepare for the grand opening of the Boys & Girls Clubs…

"You learn a lot about someone when you share a meal together."  - Anthony Bourdain What could be happening that Mary Poppins serves up cotton candy to a pair of…