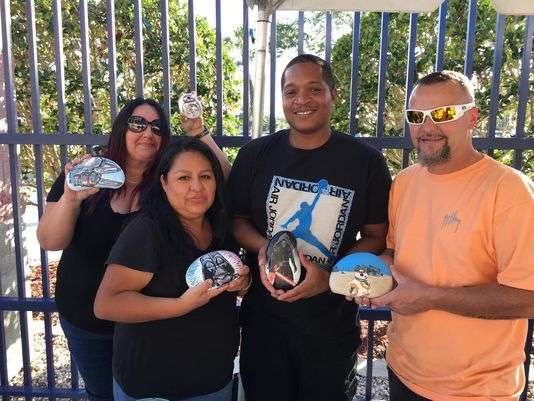 “We’re grateful to PSL Rocks for their generous donation of rocks,” said BGCSLC CEO William Armstead. “We’re proud to be associated with this unique organization that is becoming a strong presence in Port St. Lucie.”

PSL Rocks volunteers paint small rocks that they then hide mostly on the grounds of city parks and recreational facilities throughout the community.

Those who find the rocks are invited to bring them to any one of several city facilities. Later in the year, the rocks will become part of a sculpture that will be displayed publicly.

Thirty teams of chili chefs are preparing for the 35th Annual Chili Cook-Off to benefit the Boys & Girls Clubs of St. Lucie County and there’s still room for a…

The concept of escape rooms began with video games, and later was converted to real-life games. The Port St. Lucie Escape Room is located at 1022 S.E. Port Saint Lucie…

The Rev. John Mamangakis and Dennis Starr from St. Nicholas Greek Orthodox Church recently met with Will Armstead, CEO of the Boys & Girls Clubs of St. Lucie County, to…