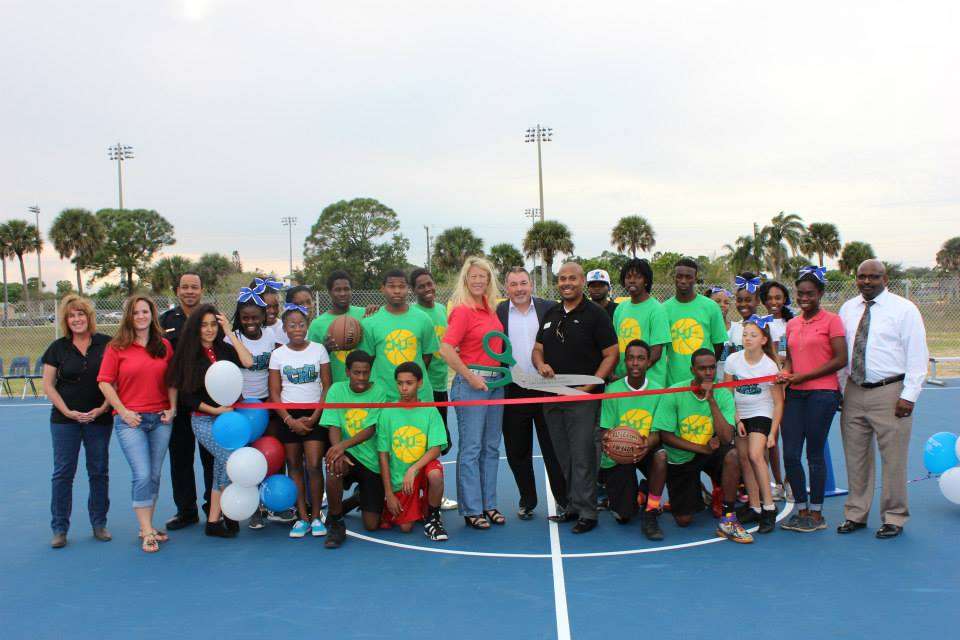 Just less than two years ago, there was a shooting that took place at the Sportsmans’ Park basketball courts, which resulted in a fatality. One of the teen Boys & Girls Club members who lives in the area was at the court that night, and was traumatized by what he had witnessed and shared the story with club staff the next day.

The park’s courts were shut down for about two months following the tragedy. This affected all of the club members and parents who then had a heightened sense of fear concerning the safety of their children. After the shooting, a club tour was given at the Chuck Hill Unit, to the Gordon family of K. Gordon Construction and the Paradise Homes teams and the desire for a safe basketball court at the club was expressed. They generously agreed to help.

In the spring of 2013, Boys & Girls Clubs of St. Lucie County wrote and submitted a grant application for Lowe’s Charitable & Education Foundation and were awarded the grant for a total of$42,000. With the grant, the Chuck Hill Unit was able to get the outside of the facility painted and new flooring throughout the club. More renovations were made as well, but most importantly, the Chuck Hill Unit was able to finally have their own basketball court.

“Karen Gordon and her son Andrew Gordon, and their team were beyond amazing. They handled everything from permits and schedules to materials. The very first day, Karen walked in the club with four brand-new basketballs as a sign to club members that their dreams were about to become a reality,” said Unit Director London Reeves.

Dear friends: What’s on your wish list this year? For our kids, it’s a Great Future. You have the opportunity to positively influence and impact the youth of St. Lucie…

We have many reasons to celebrate! Our team at Boys & Girls Clubs of St. Lucie County is our greatest asset and as an organization we are dedicated to investing…