The 39th Annual Chili Cook-off, presented by A & G Concrete Pools, enticed kids and adults to converge on Clover Park in Port St. Lucie.  With a new location and a date on the October 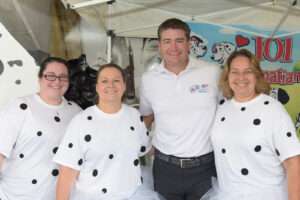 Travis Leonard of presenting sponsors at A&G Concrete Pools and Taylor Hoskins, board chair, ceremoniously opened the gates to begin the day.

Participating teams went all-out decorating their frightfully delightful booths with hopes of earning recognition for their efforts while their teams doled out secret-recipe laden chili.  Kids were challenged to try their skills at various carnival-style games while additional fundraising efforts, such as the prize raffles, occurred.  But it was trick or treating at each of the chili booths that reigned supreme between the costumed team members and the youngsters!

Twenty teams participated this year with Halloween-themed booths that included Haunted House, Nightmare Before Christmas, 101 Dalmatians, The Addams Family, and a slew of other highly decorative motifs. The event exceeded its fundraising goals through the pre-event fundraising by the teams as well as the participation by the guests during the event. 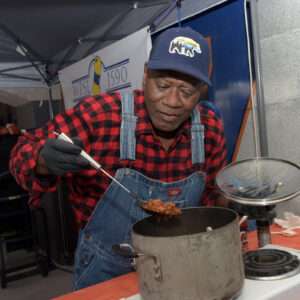 With stadium seating at the home of the Mets, guests were able to enjoy their chili while being entertained with some talented performances by members of the BGCSLC emceed by the Club’s own Rasheedah Ahmad on stage at home plate. The audience reveled in the talents attained behind the organization’s iconic Blue Doors as they witnessed their dedication to performing their Pledge, singing our National Anthem, followed by board-breaking Tae Kwon Do and Drum Line demonstrations.

The annual Chili Cook-Off wouldn’t be complete without recognizing the best booths, costumes, contests, and Chili. Fundraising awards will be announced when the tallying is complete.

Halloween costumes and a messy Jell-O eating competition engaged the younger audience members during the day.  A pre-event scarecrow designing contest amongst the different Clubs and won by the Ken Pruitt Club encouraged creativity and togetherness.

The Law Offices of Hoskins, Turco, Lloyd, and Lloyd, dressed as the Addams Family, won the Best Chili Costume competition.  The Fort Pierce Utilities Authority (FPUA) earned the title for the Best Booth with their Michael Jackson ‘Thriller’ theme.

During other perennial events, two young ladies, Mia and Sophie, each received medals for the title of Little Miss Chili Pepper, and the teenaged Zay received the title of Mr. Jalapeno. 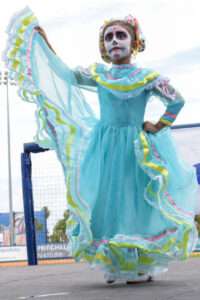 Percy Peek Teen Club member and Youth of the Year candidate, Essence, triumphed in the Kid’s Chili Eating contest.  For the fifth year in a row, Tom Moran won the Chili Speed Eating competition after traveling from Texas to retain his title.

HANDS of St. Lucie County won bragging rights for the People’s Chili Choice Award, with FPUA and Mortgage Works right behind them.

“This year, more than ever before, we showcased the talents of our own Club members, and the feedback has been amazing. It’s great to see people react to a youth breaking a board in a Tae Kwon Do demonstration or playing in a drumline because they weren’t aware that we provide these skills for our members” said Will Armstead, CEO of BGCSLC.

“Next year you can bring your own culture to your Chili booth,” said Michelle Oakley, Director of Events, as she announced the theme for 2022’s BIG 40th Anniversary of the Chili Cook-off as ‘Around the World!’  Save the date, Oct. 22, 2022, as planning begins NOW!

The students visited Florida State University, Florida A&M University, Bethune Cookman University and the University of South Florida. The tour was made possible through the generosity of Joey Gambina, owner…

Nelson Family Farms has become a Strategic Partner of the Boys & Girls Club of St. Lucie County by donating $5000 to support the Club’s youth development programming. In a…

A&G Concrete Pools is proud to sponsor the 37th Annual Chili Cook-off.  This year’s fundraising event will be held on Saturday, July 13th at the Fenn Center in Ft. Pierce. …